Another tango about rain and sadness, with excellent artists.

Written in 1943 by Aníbal Troilo and Enrique Cadícamo, Garúa was recorded within three days in August 1943 by Troilo with Francisco Fiorentino and by Pedro Laurenz with Alberto Podestá. 20 years later, Troilo made another recording with Roberto Goyeneche. 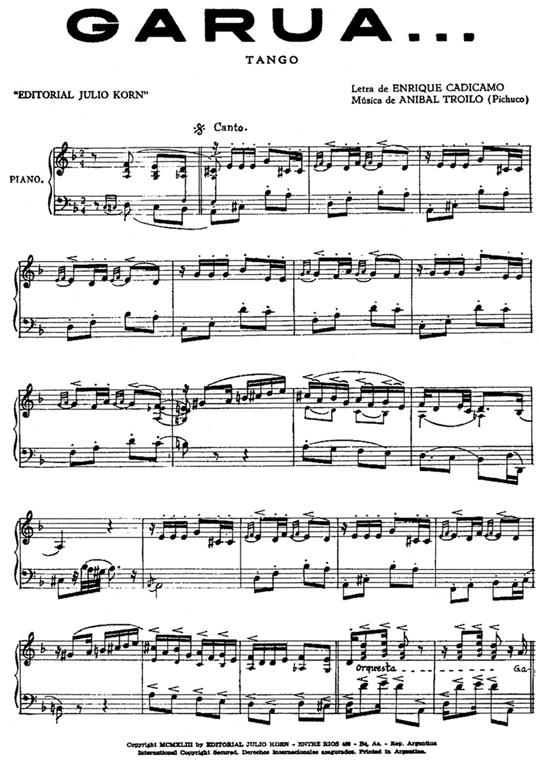 "Garúa" means "gentle rain", and in this tango it's an image for the sadness and despair of a lost love.

These are the versions recorded by Laurenz and Troilo:

There is sadness and pain in the melody from the first moment, the violins are weeping, the bandoneons are moaning, and the piano makes us hear the raindrops fall. Podestá's voice starts low and restrained and then increases and goes low again, sounding sad; but not as sad as the instruments that accompany the singer with variable countermelodies, and the sound of the raindrops evoked by the violins playing pizziccato.

In Troilo's version we hear in the A part more anger than depression, expressed by the sharp sound of the bandoneons and Orlando Goñi's grumbling piano, culminating in a crescendo. and then change of mood to depression expressed by the violins and viola. Fiorentino works with a lot of volume dynamics, expressing changing moods between depression and drama, and this is intensified by the magic orchestra playing behind. Then, Aníbal Troilo's bandoneon comes weeping bitterly.

The arrangement is the same as in the version with Fiorentino, but the orchestra plays slower and heavier; more "opera-like". Roberto Goyeneche sings with rubato and vibrato even in the consonants and a lot of drama in his incredibly voluminous voice; drama as well in the orchestra accompaniment, with the wonderful piano of Osvaldo Berlingieri during the word "Garúa". Troilo's solo sounds once more incredibly sad, but it has a more metallic timbre and vibrato; and then Goyeneche comes back to sing a heart-wrenching end.