No drama in the lyrics - an instrumental about a beautiful spring morning.

Roberto Firpo (1884-1969), one of the pioneers of tango, wrote this piece in 1912. He got the inspiration when he was walking home in the early morning after having played with his musicians all night, and heard the birds singing.  So let's listen to some tango interpretations of the lovely soundtrack we can hear every morning in these strange times. 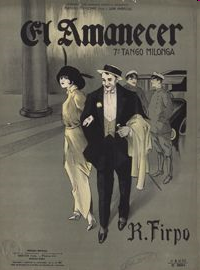 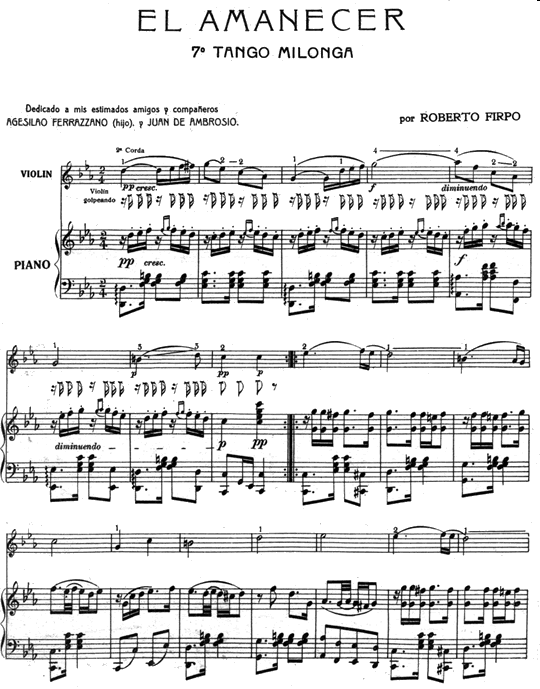 Here we have in the very beginning the sounds that the nocturnal hears when he walks home: workers hammering in the factory and birds singing. Like many instrumentals, this piece has three motives, in an A, B, and C part, the structure is ABCA. In the A part we hear violins in three roles: playing the sweet melody, playing the countermelody with pizziccato, and mimicking the birds' singing; and the bandoneons play a small interlude. Then in the B part all the violins play the same but different; the elastic piano (played by Osvaldo Pugliese) leads to the C part, where we have a simple but beautiful violin solo. And in the end the A part comes back with the birds.

Here the structure is ABACA. The bigger orchester plays with more warmness and richness in the arrangement, bandoneons and piano are more present, although the violins still dominate. The sound of the violin tutti is soft and sweet, due to the deep vibrato they apply, and with variation in the volume. We hear bird singing in all the A parts, and it's particualarly rich and beatiful in the last A part.

In times when he couldn't maintain the big orchestra, Firpo played with a cuarteto of piano (played by himself), bandoneon and two violins. The cuarteto often sounds sharp and nervous, and many people don't like it (and many know only the cuarteto and therefore reject "Firpo" in general). Firpo's cuarteto plays in the style of the Guardia Vieja, that means with higher velocity and strong rhythm. In this version with the structure ABCABA the piano is extremely energetic, also the bandoneon that is itself producing bird sounds, not only the violins. There are crazy dialogues of violins and bandoneon in the second A part, and extensive bird sounds in the final A part.

Di Sarli plays much slower and solemn. The structure is ABCA, with an extra repetition of the final A part; and in every part the melody and countermelody are played with different role distribution between violins played with the bow, violins played pizzicato, bandoneons, and piano. The bird sounds in the final are delicious.