A comparison with an extreme contrast

Adiós arrabal was written in 1930 by Juan Bauer (music) and Carlos Lenzi (lyrics), and it was only recorded twice. The two versions, from 1930 and from 1941, are from different decades and also from stylistically very different orchestras: The avant-gardists of the twenties, the sexteto run by the De Caro brothers Julio and Francisco; and the popular "Los ángeles" Ángel D'Agostino with Ángel Vargas. 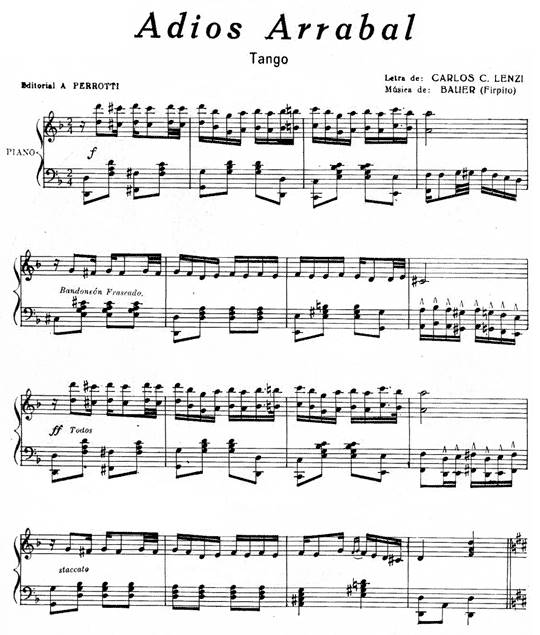 This is one of many tangos about the barrio, the home, which is loved but not idealised. In the lyrics, that contain some lunfardo words, the protagonist leaves his poor neighbourhood to find a better life; and in the next verse, not having found it, he comes back to his home and his mother.

De Caro's version, where we can clearly distiguish the two violins and the two bandoneons of the sexteto, takes expressiveness to extremes. The violins sometime play sometimes high and shrill, sometimes low and lascivious, with rubatos at any time. In the B part we have a dialogue a capella between the two bandonens, and in the second A part an even more crazy dialogue between the two violins, always accompanied by Francisco De Caro's piano that keeps the music grounded in all the crazyness, playing sometimes chromatic and dissonant. The singing of Pedro Lauga is congenial, not beautiful, more like shouting, and accompanied gently by a playful violin; only the first part (about leaving the arrabal) is sung.

D'Agostino's version has a completely different spirit. It sounds warm and peaceful, really like "at home". The orchestra plays transparently with the instrumental groups changing roles between main melody, countermelody, and interlude. The singer is integrated in the orchestra as another instrument, and Ángel Vargas's warm voice expresses the sentimental view at the arrabal. In this version, the verse about the protagonist coming back is also sung, and in the end some references to tango as part of the home are more spoken than sung.

A translation with background info by Michael Krugman:
https://tangodecoder.wordpress.com/2014/05/26/adios-arrabal-return-of-a-repentant-rascal/